By the fall of 2010 we all had a common desire – to make education more accessible for Ethiopian children. When we set in action the interest among many of our friends grew fast. A common interest made it easier to act in another culture. In 2013 the Ministry of Foreign Affairs also supported our project for the first time.

Today, with the help of friends from Estonia, Italy, Norway and Germany, 106 Soddo children go to school. These are the children whose families live in extreme poverty. We also support 55 children with school lunch. In addition to promoting school education, clinics in the Wolaita region receive regularly aid packages from Estonia for newborn. This activity encourages mothers to give birth at a hospital and the newborn babies get their first clothes and a hat.

Many people give their contribution by knitting these little hats. Multi Marger Ltd. manufactures wrapping sheets.

In our activities we are governed by the NGO Code of Ethics.

I cannot be happy living just for myself in Estonia. As I saw my child coming an adult overnight, it was proper time for me to devote myself to something special. His becoming independent was surely accelerated also by my desire of going to Africa as a volunteer.

Before I went to Africa for the first time I didn`t know yet that there were 6.2 children per every women in Ethiopia and seventy students in one class room .Similarly, I didn`t know anything about their eagerness to study as well as parents` disability to afford education to all their children. I was surprised by Ethiopia`s beauty, people`s friendliness and respect towards Europeans. It came out quickly that Estonians had much useful to learn from Ethiopians. After my first month there I was convinced that the best way of getting rid of non-existing concerns was to GIVE AWAY FROM ONE`S ABUNDANCE !

Having come back I quickly understood that every Estonian has  lot of skills that can be shared. Very fast we managed to get together a bunch of friends with the same desire.

I have lived in Norway for fourteen years altogether and travelling has become my big hobby. I have gone to several places of the world but I have never had any idea of going to Africa. Having been bored with Norwegian peaceful and routine life I recently made plans of going somewhere far away working with children. At the same time I was keenly observing the Ethiopian projects of Laura , Andres and Merle on internet. So, when I was asked if I wanted to join them I didn`t hesitate a moment and that’s how I ended up in Africa. Being in  Ethiopia for the first time I realized that something must have to be done to help these people who didn`t have half of the conveniences that were taken for granted in Europe!

I am a 30-year-old sociologist and I am happily married. Life has offered me relatively many possibilities to see distant countries and experience different cultures. Over and over again I have discovered that people are actually very similar everywhere, let it be in Nepal, Kenya, Guatemala, Ecuator, Kuba or wherever else. However, as we all know, living conditions in these countries aren`t similar. Poverty hinders milliards from having hope for happier future. Travelling In Central Africa as well as in rural areas of Amazon I noticed the central position of schools in villages. It came out that local people there concerned education one of many possibilities for there children to escape from poverty. When Merle offered me the possibility to participate in Damota projects I agreed at once. From one hand I had always wanted to take part in some ministerial project. On the other hand, education promotion is just the activity having long-lasting influence to my mind. I believe that through this project I have much useful to learn myself, seeing the cheerfulness of these people that is relevantly more genuine than something else we can experience amid our western welfare. 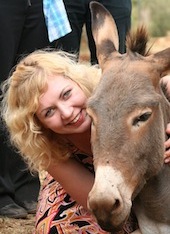 I am a  25-year-old physician. Desire of doing welfare work in some developing country had been in my mind for some time already. Earlier I imagined myself doing some medical work there but when I heard about school building project in Ethiopia and about the trip there in January 2011, I was interested in joining the team. I was very impressed by what I saw and experienced there, also in medical sense. Access to medical aid is bad, there are few physicians and the general medical knowledge of the inhabitance is insufficient. All this can be improved by education promotion.

More than half of the population live beyond any level of poverty. However, staying there one can clearly see that happiness doesn`t mean money there. This truth and  positive attitude towards life are  useful things for  Europeans to learn and this is obiously the reason that makes one visit Ethiopia again:)